Greek banks, among Europe’s weakest, are getting rid of their bad loans at a healthy clip.

In spring, the pandemic interrupted plans among the country’s banks to shed loans still festering from the eurozone crisis a decade ago. But stimulus from central banks and governments globally has sent fresh cash into funds that buy non-performing loans, reinvigorating the efforts.

“Many of the investors are in the process of fund raising or have raised additional funds for what they see as a wave of opportunity,” said

Alok Gahrotra,
a partner in the portfolio lead advisory team at Deloitte that advises NPL buyers and sellers. “There’s a lot of dry powder to deploy.” 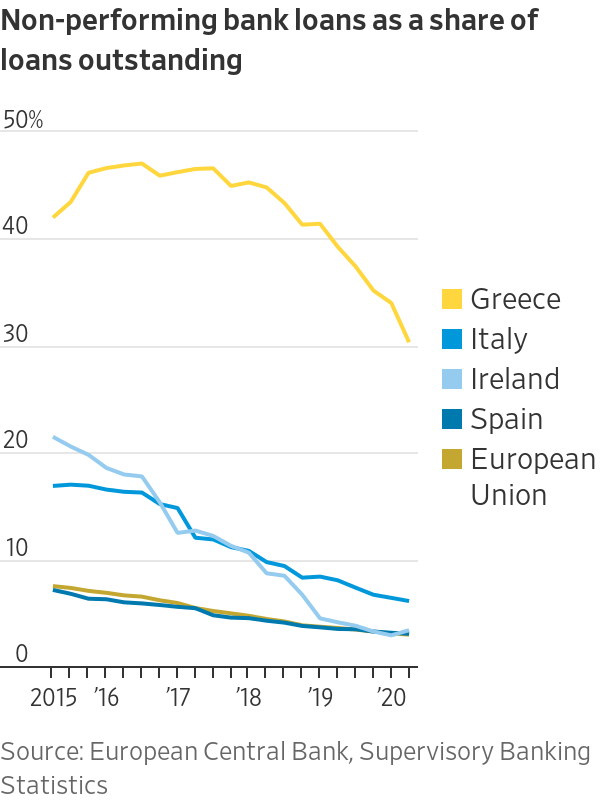 In late November,
Alpha Bank,
one of Greece’s four dominant lenders, said it was in the final stages of selling a €10.8 billion gross loan portfolio—the equivalent of $12 billion—along with its loan-servicing unit. The preferred bidder is U.S. investment firm Davidson Kempner Capital Management LP, which beat out Pacific Investment Management Co. and others for what would be the largest-ever NPL sale in the country. Two more big banks,
National Bank of Greece
and
Piraeus Bank,
each aim to sell around €7 billion in loans next year.

The three transactions will tap a new state-supported securitization program called Hercules, which was first used by Eurobank SA in June to dispose of €7.5 billion gross loans, “paving the way for its peers,” said Eurobank chief executive

The eurozone crisis a decade ago attracted U.S. investing giants such as Pimco, Cerberus Capital Management and
Apollo Global Management
to buy bad loans from banks for as little as a few cents on the euro. Some investors also scoop up banks’ servicing units to build larger businesses managing bad loans from multiple lenders, a fast-growing sector in Europe. Returns depend on recoveries from selling collateral such as homes and office buildings backing the debt, and fees collected by the servicing units.

The investments flow into NPL funds and other credit-focused funds that are mainly marketed to institutional investors and the rich.

Are the bad loans of European banks a good investment? Why or why not? Join the conversation below.

Ireland, Spain and Italy all whittled down their NPLs this way. Greece’s banks made only limited progress because the country’s recovery took longer and the government and banks were working on measures to attract investors. The key plank, finalized only last year, is the Hercules program. Modeled after a similar program in Italy, the banks sell NPLs to securitization vehicles that issue notes to investors. The banks then buy the safest tranche of notes with a government guarantee for repayment, allowing for larger transactions.

“Because banks are allowed to provide senior funding that is guaranteed by the state for a reasonable fee, considerations are much better than outright sales without generating capital burdens,” said 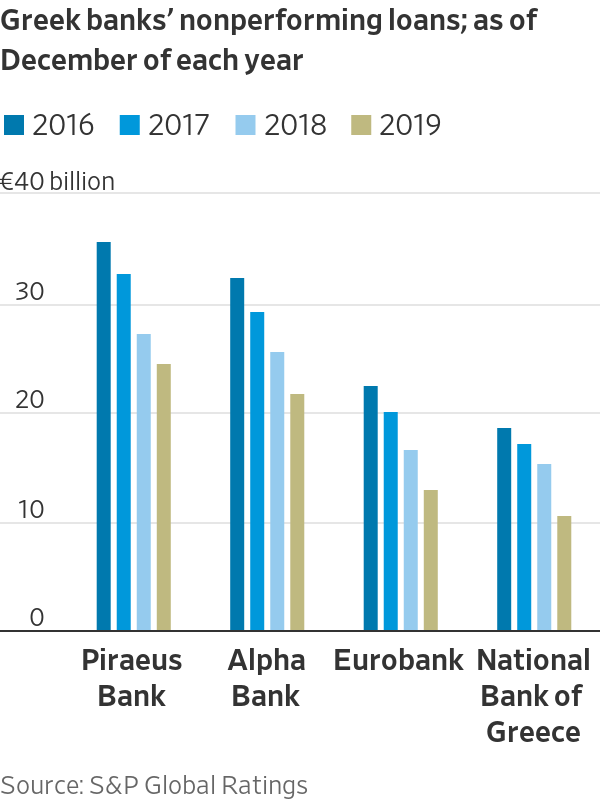 The uptick in deals is crucial for Greece to bring down the highest NPL level in the European Union. At almost half of loans in 2016, the ratio was around 35% at the start of 2020 and could fall closer to 20% if transactions go ahead as planned. The EU-wide ratio is under 3%. The pandemic caused a few months delay, but bank executives, advisers and ratings firms said most deals should be completed in the first quarter of next year.

“Market conditions are normalizing now and there is clearly investor appetite from international investors,” said

A pre-markets primer packed with news, trends and ideas. Plus, up-to-the-minute market data.

The disposals mark a turning point for an economy that was still emerging from one of the longest and deepest depressions of modern times when coronavirus hit. Greece’s tourism-heavy economy slumped along with EU peers, though the country has managed better than many in containing coronavirus infections and deaths. The big Greek banks forecast around €5 billion in total new NPLs from the pandemic—not much against the €61.3 billion in NPLs in the country as off June 30, according to ECB data. The banks say years of experience managing delinquent customers should help.

Nikos Koutsogiannis,
chief financial officer at small lender
Attica Bank SA,
said its NPL ratio fell to around 45% from a 62% peak through two securitizations predating the Hercules program. Attica aims to get the ratio to single digits by securitizing more loans next year. Mr. Koutsogiannis said Attica wants to free up capital for lending to companies in sectors such as the environment, energy and infrastructure that Greece is targeting for foreign and government investment.

“We have been working as firemen putting out fires, but at the end of the day banks need to get back to banking,” Mr. Koutsogiannis said.

Write to Margot Patrick at margot.patrick@wsj.com

How Is the Economy Doing? Here’s What Banks Say

Florida family reportedly makes $1 million selling bottles of COVID-19 'cure' that was nothing...