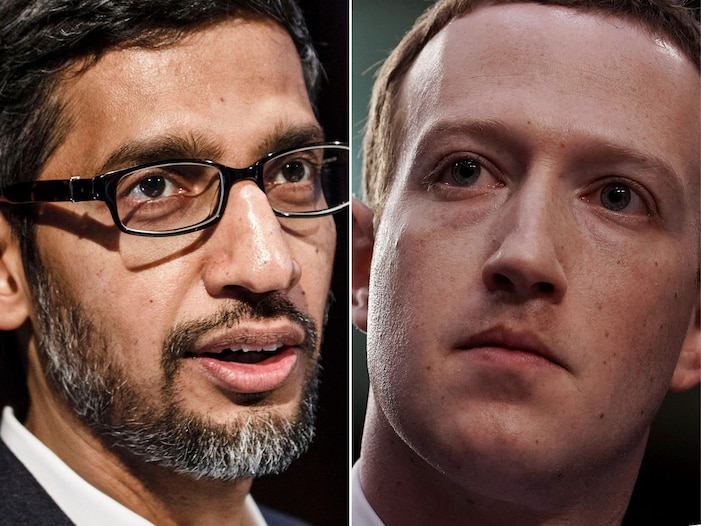 Over the past year, Facebook and Google have both been working on deals with publishers across the globe to pay for the content shared on their respective platforms. On the surface, that certainly seems like a fair thing to do.

Facebook started paying publishers in the UK this month with the launch of its “News Tab” there. The company previously launched a test of the feature in the US, and said at the time it would be paying participating publishers.

Google, meanwhile, has said it plans to pay $1 billion to publishers over the next three years. It signed deals last year with Le Monde and Le Figaro in France and has been rolling out Google News Showcase, which allows publishing partners to highlight content and receive a royalty.

But the two tech giants aren’t paying for content out of the goodness of their hearts. Both companies are facing extraordinary pressure from lawmakers and regulators in the United States and elsewhere. The European Union passed copyright laws that require digital ad proceeds to be split with the publications, and even individual creators. In Australia, the government is finalizing a “mandatory code” that would require the tech giants to negotiate with publishers over how much they should pay to display snippets of content from those sites.

While we’re talking about what’s fair, I think it’s fair to ask whether this is really the best solution to the problems facing publishers. In order to answer that, it’s important to understand the real problem, which – by the way – has almost nothing to do with Facebook or Google.

I don’t think anyone would argue that digital publishing hasn’t had a rough decade. It gets a little more complicated when you start to ask yourself, why?

There’s no question that the internet changed almost everything about publishing, but contrary to popular belief, the internet is much larger than just Google and Facebook.

The most significant factor that led to the current state of publishing was that the internet made it easy to reach a mass audience in a way that you simply couldn’t through physical distribution. A small publication in any town in American might have 10,000 print subscribers. Put the same content online and suddenly you could reach 10 or 100 times that. And, if your content went viral, maybe 1,000 times more.

At the same time, it didn’t cost you anything more to make the content available. You didn’t have to print 10 times as many copies of your newspaper.

This represented an extraordinary opportunity because advertising has always been a greater driver of revenue for newspapers than circulation. In 1991, as an example, advertising was responsible for more than 75% of total newspaper revenue generated, according to Pew Research. In 2006, that piece of the total revenue pie was up to 83%.

As the internet made it possible to reach a mass audience, advertisers were more than willing to pay for ads. That was very good news for publishers, and they wasted no time putting their content online, often for free to users.

At the same time, the internet was also unbundling the services you used to find in your local paper. Content became specialized, with different sites representing every imaginable niche. Where you used to check out the classified section in the paper, you could now visit Craigslist, or eBay, or Cars.com. Instead of the “help wanted” section, you would visit Indeed or LinkedIn.

The truth is that the total amount of revenue lost in classified ads probably wasn’t nearly as big of a problem as the fact that every one of those specialized sites was now a competitor for digital advertising. If you own a local car dealership, while you used to advertise in your local paper and on its website, now you might choose to advertise on Cars.com instead since that’s where the people looking to buy a car are likely to be.

Then, of course, came Google and Facebook. Because of the sheer size of their audience, and their ability to track and gather data on their users, they were far better equipped to take advantage of the shift in digital advertising. Those two are now the largest advertising platforms in the world, built entirely on the fact that they provide a service that’s free to users, who can then be shown target ads by the highest bidder.

The idea that the two companies are somehow appropriating the content of news publishers isn’t quite right. Google News isn’t monetized, meaning Google doesn’t show ads against the content that appears within the app or in your browser. Besides, Facebook and Google drive a not-insignificant amount of traffic for most publishers. It seems strange to then charge them for driving that traffic.

That is, however, exactly what’s happening. There’s no question that online publishers, and journalism especially, are hurting. The reason they’re hurting, however, is that the business model isn’t sustainable anymore. It’s time for a new business model. It’s time to embrace that the way people consume content is different than it was 20 years ago. It’s different than it was even five years ago.

Forcing Google and Facebook to pay publishers for links to their content is a bad idea because it feels like a solution, but it isn’t. When you feel like you have a solution to a problem you stop addressing it, but that doesn’t mean it actually starts getting better.

Publishers are expected to lose as much as $20 billion in ad revenue over the next three years, according to research from PwC, a far cry from the $1 billion Google promised. That’s hardly a solution to what’s becoming an increasingly dire problem.

The idea shouldn’t be that the government look for ways to maintain the status quo by taxing new technologies, especially when those new technologies are far more efficient and desirable for users. Unfortunately, that’s far too often the default response whenever technology disrupts an established industry, but it rarely helps.

According to a report from Reuters, in Australia, an inquiry found that “for every A$100 of online advertising spend, A$53 goes to Google, A$28 to Facebook and A$19 to other media companies.” That’s certainly a problem for publishers, but the solution isn’t to find a way to redistribute that.

If Google and Facebook want to find ways to help publishers and increase the viability of journalism, that’s definitely a good thing. But don’t mistake it for a solution to the real problem, which is that the way people value, find, and consume information is different. The business model has to be, too.

Making sense of the chaos in commodity markets

Unique business opportunity in a form of credit repair with no recession & competition...

Two Phoenix men perpetrated one of the largest thefts in YouTube history the deed by charging up to $23 million for song royalties on the platform. Among...

What did Jho Low do and where is he now? Charges...