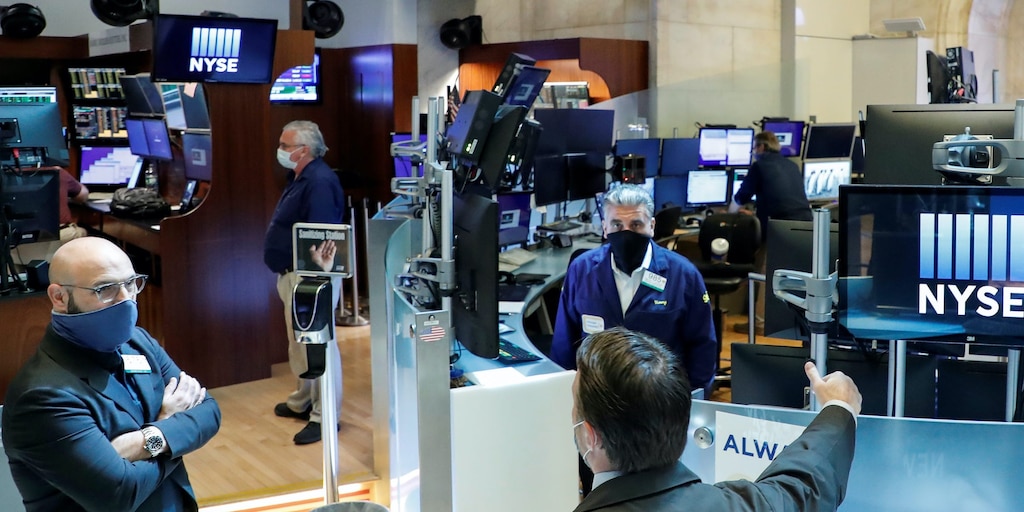 The stock market’s June rally continued on Wednesday as growing hopes of a smooth economic recovery drowned out nationwide protests.

Major indexes gained through the morning after an ADP labor-market report said US private payrolls fell by 2.76 million in May, less than one-third of the decline expected by economists. The reading was a steep decline from April’s record slump of 19.6 million.

Here’s where US indexes stood soon at the 4 p.m. ET close on Wednesday:

Read more: A $40 billion wealth-management firm says the US economy is only 19% recovered from the pandemic – and lays out a winning investing strategy in the wake of a massive stock-market rally.

The Nasdaq 100 temporarily traded above its February 19 record close before ending the session just below the threshold. The S&P 500 reached three-month highs, led by a bank-stock rally.

A report from the Institute for Supply Management pointed to positive performance within the US service industry, easily the largest part of the nation’s economy. The organization’s non-manufacturing index jumped to 45.4 in May from 41.8, remaining in contraction territory but turning higher after plunging on coronavirus woes.

“We may be past the bottom and non-manufacturing activity may start to slowly improve in June, but we are still a long way from returning to pre-virus conditions,” Gregory Daco, chief US economist at Oxford Economics, said. “Consumer and business confidence will play key roles in shaping the economic recovery.”

Read more: A proprietary Bank of America indicator points to 20%-plus gains in the stock market over the next year. Here’s what the firm recommends buying now ahead of the rally.

Airlines outperformed the market upswing after the White House banned Chinese airlines from operating passenger flights to the US starting mid-June. The move follows the Department of Transportation accusing China of blocking US passenger flights. Alaska Air led the group, gaining as much as 12% on the news.

Oil erased early gains and hovered around little changed amid doubts on when OPEC will next meet. The global coalition is set to extend record production cuts for at least another month. But leading members are have threatened to cancel a Thursday meeting unless the entire group agrees to a concerted extension, according to Bloomberg.

Nicholas Colas, a cofounder of DataTrek Research, said in a Tuesday note that while such rallies “may seem counterintuitive, and perhaps not even ‘fair,’” history holds several examples of investors looking past near-term strife to bet on surging corporate profits.

GOLDMAN SACHS: Buy these 15 stocks for powerful profit growth after a historic rally leaves the market with little room for error

How It Works? – Trak.in – Indian Business of Tech, Mobile & Startups

Members of Congress are turning to the same political consultants who got them elected to blast out taxpayer-funded communications from their government offices, records...

How It Works? – Trak.in – Indian Business of Tech, Mobile...

Members of Congress are turning to the same political consultants who got them elected to blast out taxpayer-funded communications from their government offices, records...