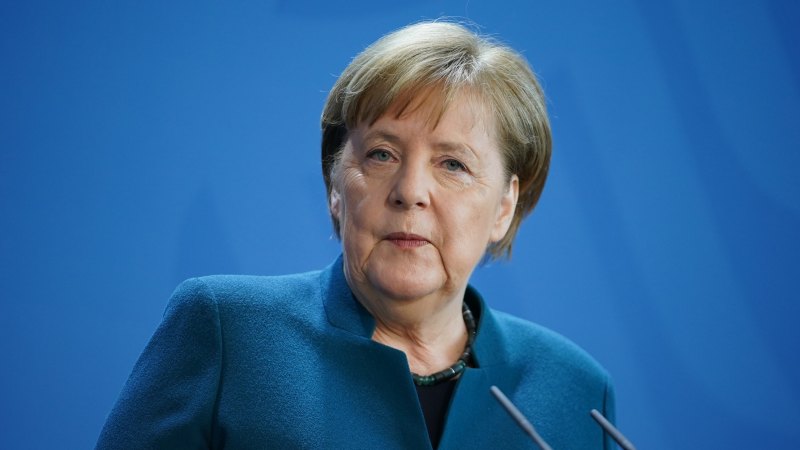 Aid will come in the form of loans and must be repaid. Any extra debt will be subject to the surveillance and contractionary ideology of the EU fiscal compact once the pandemic is over.

Chancellor Angela Merkel said grants of money are “not in the category of what I can agree”.

She warned that if Europe is going to spend vast sums then all states would have to submit to “coherent taxation policies”.

This is a polite way of telling Italy that the quid pro quo is wealth confiscation to restore debt solvency, akin to what happened in the early Nineties or with Argentina’s corralon.

It sends shivers down Italian spines.

The new recovery fund will be linked to the EU’s internal budget and mostly come in the form of lending.

It will be subject to Treaty Article 122 to keep tight control. Two thirds of the trillion-plus headline will be achieved by “crowding in” private money.

French president Emmanuel Macron, in a remarkable outburst, issued a warning for those rich northern states that “profit” so handsomely from exporting to the south: they might wake up one day to find that the EU single market is “no longer there” unless they are careful.

“If you let part of Europe fall, the whole of Europe will fall. The countries that are blocking are the same ones as ever, the frugals: Germany, the Netherlands… whose deep psychology and political constraints justify very hard positions,” he said.

This accusatorial tone will surely grate in Berlin and The Hague.

They know that Mr Macron is trying to bounce the north into fiscal union, exploiting the emotions of the pandemic to change Europe’s constitutional structure. Such a jump violates treaty law.

It breaches the German basic law and alienates the Bundestag’s tax-and-spend prerogatives. It cannot legally be done with a flick of the political fingers. Nor is France an honest broker.

Marchel Alexandrovich, from Jefferies, estimates that a U-shaped recession will push France’s public debt to 135 per cent of GDP this year. It would hit 142 per cent under a W-shaped slump caused by rolling lockdowns.

France and Germany had similar debt ratios before the Lehman crisis in 2008. They have since diverged dramatically. The pandemic shock is turning France into a full member of the vulnerable Latin bloc.

Covid-19 requires a vast Marshall Plan financed by “joint debt” and “budgetary transfers” to the hardest hit regions. “Our Europe has no future if we don’t do this,” he said.

The EU did agree on other measures with a nominal value of €540 billion ($914 billion) but this figure is financial legerdemain.

One component is really just €25 billion of actual money from the European Investment Bank, to be levered up by private funds to €200 billion.

“Previous experiences with similar structures such as the 2016 ‘Juncker Plan’ have been mixed, to put it mildly,” said economist Holger Schmieding from Berenberg Bank.

There is €100 billion in loans for Kurzarbeit jobs support. The last €240 billion is to come as lending from the EU bailout fund (ESM) on “light conditionality”.

This is politically toxic in Italy – deemed a Trojan Horse for a Brussels takeover – and it is unclear whether any country will touch it.

Citigroup said each country is being left to meet the shock on its own and therefore that the package will fail to convince markets. “That leaves the ECB, yet again, as the first and last safety net for Europe,” it said.

The ECB’s Christine Lagarde warned EU leaders of doing “too little, too late”. She cautioned the eurozone could contract by 15 per cent this year.

Mrs Lagarde also pointed out the fundamental injustice and economic dangers of what is happening. The strong states are spending up to 14 per cent of GDP directly to ensure a rapid rebound: the weak dare not match this.

Some are spending as little as 1 per cent, implying lasting damage and a blighted recovery. Jefferies estimates a W-shaped scenario would push debt ratios to 183 per cent of GDP in Italy and 158 per cent in Portugal.

Worse yet, Giada Giani from Citigroup says Italy will not fully recoup this year’s lost GDP in 2021, and will then flat-line in stagnation until the middle of the decade. This will destroy monetary union if allowed to occur.

The ECB will avert an immediate crisis by mopping up Italian debt under its “pandemic QE” plan. But it cannot do this forever.

Italian debt made up one third of the ECB’s total bond purchases in March, double the country’s “capital key”, yet this has failed to hold down Italian yields.

Private sellers are off-loading their bonds on the ECB and rotating the proceeds out of the country in what amounts to capital flight.

These flows will surface in the ECB’s Target2 payments data. The Bundesbank is in effect having to provide a forced “credit” to Club Med central banks that will soon blow through €1 trillion. At some point this will become politically and legally untenable.

The German constitutional court will rule on May 5 on how far the Bundesbank can go in supporting the ECB’s emergency policies. The exact wording will be crucial.

Markets may suddenly discover that the ECB cannot play the role of permanent saviour after all. Then what?

Did OCBC set a precedent with its ‘goodwill payout’ for scam victims? No, lawyers...

Behave Badly and Risk Getting Your Funds Frozen: Brussels Edition