Henry Harteveldt, president of Atmosphere Research Group, a travel analysis firm in San Francisco, said that carriers might continue to leave middle seats empty in coach “until they see demand exceed two-thirds of where it was before the pandemic.” Now, he said, “You can be benevolent. It’s easy to give away a product that you don’t have any demand for.”

To get through the next few months, airlines successfully lobbied for a huge federal rescue. But half of that money was intended to cover payroll and that will run out by the end of September. Few in the industry expect Congress or the public to tolerate another bailout. So, for now, airlines are preparing for a long, lonely fight for survival.

No amount of foresight could have prepared the industry for the pandemic.

Even Southwest Airlines, which reported its 47th consecutive year of profitability in January, expects to lose an average of $US30 million to $US35 million a day through June. American Airlines, the most indebted large company, is aiming to get its own losses down to $US50 million a day by the end of next month. Delta and United Airlines, which were riding high after several profitable years, are prepared for a full year with virtually no passenger revenue.

“It would be naïve to believe we or anyone for that matter can accurately predict the course of this crisis or the recovery,” J. Scott Kirby, United’s president and incoming chief executive, told investors this month. “When we say plan for the worst and hope for the best, however, we really mean it.”

I think a lot of people all over the world are going to be wrestling with fear and trust.

To stem the bleeding, airlines have made deep cuts to every imaginable expense, closing dozens of airport lounges that were once considered critical to attracting well-heeled travellers like investment bankers, freezing hiring and bonuses, slashing advertising and technology budgets and postponing cabin renovations. American is taking its entire fleet of 34 Boeing 757s and nine Airbus A330-300s out of service years ahead of schedule. Southwest more than halved an order for the troubled Boeing 737 Max.

Southwest’s chief executive, Gary Kelly, last month warned employees that if a dramatic rebound doesn’t materialise by July, the airline could shrink. It wasn’t a prediction, he said in a recorded message, but a recognition that the timing of the recovery is out of the company’s hands.

“Our goal is to thrive,” he said. “The imperative here is to survive.”

There’s little indication that a recovery is coming soon. Most industry analysts and executives expect years to pass before airlines fly as many passengers as they did before the pandemic. Even then, a rebound may come in fits and starts, propelled by medical advancements, an economic rebound and shifts in the public’s tolerance for risk.

Take China, for example. The number of domestic flights there started to recover in mid-February, but plateaued in early March at just over 40 per cent of levels before the outbreak, according to the International Air Transport Association, a global industry group. 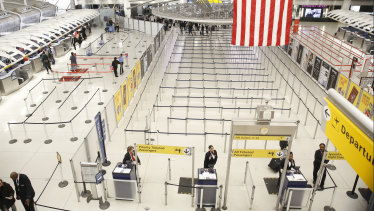 Poll after poll has shown that the vast majority of people are likely to wait on the sidelines for quite some time. According to one recent survey by the Democracy Fund + UCLA Nationscape Project, 60 per cent of people would “definitely or probably” not fly even if stay-at-home orders were lifted on the advice of public health officials.

“The airlines certainly need to get back into business but they’re going to be facing a public that’s going to be scared to travel,” Harteveldt said. “I think a lot of people all over the world are going to be wrestling with fear and trust.”

Business travel may recover sooner, at least according to a survey of the members of the Global Business Travel Association that found that a majority of travel managers expect trips to restart in the coming months. Yet Kelly, of Southwest, told PBS NewsHour that work travel would probably be depressed for years.

After spending the past decade consolidating, paying down debt, investing in planes and technology, and finding new ways to make money through fees and credit cards, the industry was in better shape than ever.

Now the airlines are triaging. Even as they slim down to preserve cash, they are finding ways to make what little money they can. Many have put otherwise unneeded planes to use transporting cargo, including medical supplies, taking advantage of a spike in freight prices.

And after passenger volumes fell in March and much of April, there are some signs that the industry has hit bottom. But there wasn’t much lower to go: The number of people screened by the TSA in mid-April was down to about 4 per cent of last year’s levels. By Friday, screenings were back up to about 8 per cent.

But the good news doesn’t even amount to a glass half full. United’s Kirby said this month that the airline was seeing a spike in searches for 2021 spring break travel, more than it saw at this time last year. But those won’t turn into bookings until the virus “is sufficiently contained,” he warned.

And next spring is still almost a year away. The question is whether the industry can hang on.